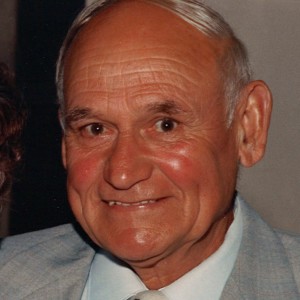 Earl Kenneth Rigler, Sr., 89, passed February 25, 2016, at his home in Landenberg, Pennsylvania surrounded by his beloved wife and family.
Earl was born on August 29, 1926, in Landenberg. He was the son of William and Lydia Crossan Rigler. He attended Kennett Consolidated School District, and served in the U.S. Army with deployment to the European theater during World War II.
In 1949, he was married to Alma Hendrickson, also of Landenberg. He worked at the E.I. DuPont Experimental Station until his retirement in 1992 following 40 years of service.
He played baseball throughout his youth, including for Kennett High School; he had a .461 batting average in 1943. He continued playing baseball during his time in the Army where he played catcher for the 47th Infantry Raiders. Earl was honorably discharged from the service in 1946 with the rank of Sergeant. In 2007, Earl was inducted into the Kennett Old Timers Baseball Hall of Fame. Earl was an avid sports fan; he especially enjoyed watching the Philadelphia Phillies and Eagles. Earl also was a skilled craftsman. He built the Chester County fieldstone home that he and Alma shared for the past 52 years, and enjoyed restoring antique furniture, doing metalwork, and growing and sharing vegetables with his neighbors.
Earl is survived by his wife of 67 years, Alma; his son and daughter-in-law, Earl Jr. and Linda Rigler; two sisters, Helen Oliveri and Margaret Lore; eight grandchildren, Jess, Alicia, Monica, Melissa, Todd, Bill, Gina, and Tyler, and nine great-grandchildren. He was preceded in death by his son, Michael, and two brothers and three sisters.
You are invited to visit with Earlâ€™s family and friends from 10 to 11AM Saturday March 5, 2016 at Landenberg United Methodist Church, 205 Penn Green Rd, Landenberg, PA 19350. His memorial service will follow at 11AM at the Church. Interment will be held privately. Contributions in Earlâ€™s memory may be made to the Church at the aforementioned address. Arrangements are being handled by the Kuzo & Grieco Funeral Home Inc. of Kennett Square (610-444-4116). To view his online tribute and to share a memory with his family, please visit www.griecocares.com.

Please enhance this tribute to Earl by sharing your memories…