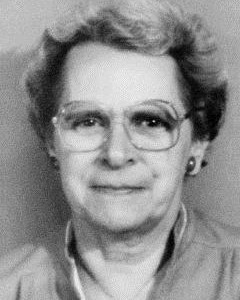 Adrienne Phillips Wickersham, 95, of Kennett Square, Pennsylvania, died of natural causes on Sunday, March 27, 2016 at her home in Kendal at Crosslands. The older of two children, Adrienne was born to Adrienne (McMahon) and Edmund Phillips on April 27, 1920 in New York, New York. She attended Houghton College in Houghton, New York, where she earned a Bachelor of Science degree in communications engineering. Upon graduation, she was employed by the United States Army Signal Corps as a transmission engineer before taking a similar position with ITT, where she also held positions in systems engineering and publications administration for various ITT companies and later Computer Science Corporation.

In 1946, she married Wilfred H. Wickersham, and together they raised two sons, William and Edmund, in Nutley and Upper Saddle River, New Jersey. Upon retiring from ITT, Adrienne enjoyed a variety of jobs in and around her community. She was administrator of the 1970 Census of Bergen County, New Jersey, and was manager of the Upper Saddle River Swim and Tennis Club, of which she was a founding member. As one who enjoyed singing, Adrienne was a long-standing member of Sweet Adelines International, one of the worldâ€™s largest a cappella singing organizations for women.
In 1977, Adrienne and Wilfred moved to Kendal Crosslands, a continuing care retirement community (CCRC) located in Kennett Square, Pennsylvania. As founding residents, they embraced the CCRC concept and helped shape the growth and feel of their new community. She and her husband traveled extensively during their retirement and introduced an entertaining photography slide series at Crosslands called â€œThe World Around Us,â€ which was always well attended. Over the years, Adrienne held several volunteer roles at Crosslands, such as manager of the Sunflower Shop, manager of the swimming pool, and member of the Residentsâ€™ Association, food committee, and Crosslands Chorus. Much later in life, she was thrilled to become a grandmother and thoroughly enjoyed her time spent with Ed and his family. For the last several years, Adrienne had the distinction of being the last living founder of Crosslands.
Adrienne is predeceased by her husband and sons. She is survived by her granddaughters, Kate and Elena; her daughter-in-law, Lisa; and her late brother Jackâ€™s children, Larry, Beckie, and Jeff Phillips.
A memorial service to celebrate Adrienneâ€™s life and generous spirit will be held at Crosslands, 1660 East Street Road, Kennett Square, Pennsylvania, at 2:00 PM on Saturday, April 23, 2016.
In lieu of flowers, donations may be made to the World Wildlife Fund (worldwildlife.org/donate) or an environmental charity of one’s own choice
Online condolences may be made by visiting www.griecocares.com
Arrangements by the Kuzo & Grieco Funeral Home, Kennett Square, PA.

Thank you for your support during this difficult time.
Please enhance this tribute to Adrienne by adding your memories.

Or to an environmental charity of one's own choice.