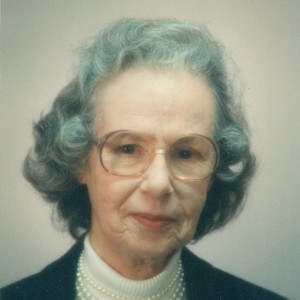 Frances Taylor was born on June 23, 1921 in Wilmington, DE. She was the daughter of Willard and Mabel Keenan Cloud and grew up on her parents’ dairy farm, Sunstone Farm, in Kennett Township.

She graduated from Westtown School in 1941 and Beacom Business College.

In 1942 she worked in Washington, D.C., for the National Service Board for Religious Objectors. While there, she started corresponding with a young Quaker man serving distantly as a Conscientious Objector, who later became her husband. When her father became ill, she moved home and helped her mother run the farm after he died in 1944.

Frances was a resident of Kennett Township during most of her life, settling on her parents’ farm across the road from where she grew up after she was married. She was a legal secretary in Kennett for 20 years.

A birthright Quaker, Frances was an active member of Kennett Friends Meeting during most of her adulthood.

She played the piano most of her life and especially loved to play by ear and compose. Her greatest passion was researching local history of the Underground Railroad and was probably the first local resident to recognize the importance that Kennett Square played. For 35 years, she and her husband spoke and showed slides to many groups of children and adults about local Underground Railroad stations and their “conductors”, often leading trips to the sites. She wrote two books on her findings: The Trackless Trail and The Trackless Trail Leads On, both illustrated by her husband.

Her memorial service will be at 2:00 pm on Sunday afternoon, April 15, 2018, in the William Penn Room at Crosslands, 1660 E. Street Road, Kennett Square, PA. Interment will be private.

To view her online tribute and to share a memory with her family, please visit www.grieecocares.com

Thank you for your support during this difficult time.
Please enhance this tribute to Frances by adding your memories.

Burial will be private.