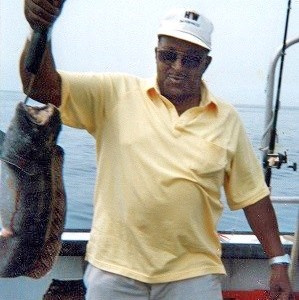 Born 1933 in West Chester, PA,  he was raised in Kennett Square, PA by his father, the late Barkley Goodwin and his mother, Mary Goodwin (nee Daniels).

Leon was educated in the Kennett School District and later joined the US Air Force where he attended Wilberforce College in Dayton, OH and proudly served our country during the Korean War. Leon was Military Police and was also on the boxing team. He returned to Kennett after his stint in the USAF and worked at Lukens Steel Company, retiring in 1995 after 40 years of employment.

Leon was an easy going man who made a lasting impression of anyone who knew him. He was kind, humorous, adventurous, and thoughtful. He enjoyed all wildlife and nature, going often to the Philadelphia Zoo, taking the family on numerous country rides, family history, farming and gardening. Leon was known to make all sorts of animals the “family pet”! He raised pigeons for decades, which were his great joy. He memorized the hunting and fishing season and had his equipment prepped well in advance! Leon loved speed. He enjoyed going out in the boat, flying/watching airplanes, and motorcycles. He enjoyed watching boxing and watching the Philadelphia Eagles (he was happy to see them get that BIG WIN!). Leon also loved food and was a wonderful cook, having spur of the moment barbecues, Friday fish fry’s and seafood meals! Leon was always encouraging and had a ‘can-do’ attitude which he instilled in all of us.

Leon was a member of the Jehovah Witness and enjoyed going to Hall and various meetings and services.

He was undeniably  a family man, affectionately giving all of his children, grandchildren and great-grandchildren unique nicknames. Leon had a strong sense of family — always attending and enjoying the massive family gatherings and reunions.

He leaves to carry on his legacy, his wife Yvonne; daughters, Juanita (Kennett Square, PA), Pamela and Teresa (both of Avondale, PA), and Dianne (Willow Street, PA); his son, Darryl (Coatesville, PA); his mother, Mary; five sisters, Ruth, Linda, Margaret, Vanessa, and Arlene; two brothers, Jerry and Ronald; 10 grandchildren, 13 great-grandchildren, a host of nieces and nephews, extended family and friends. He was preceded in death by his son, Leonard and two brothers, Larry and Pete.

Services for Leon will be held Saturday, August 3, 2019 at Kingdom Hall of Jehovah’s Witnesses, 3470 Gap Newport Pike in West Grove, PA. Family and friends are welcomed to visit from 9:00AM to 11:00AM, his service will promptly follow. Interment will be private.

We thank you for your support during this difficult time.

Feel free to share memories of Leon with us in the Guestbook below.