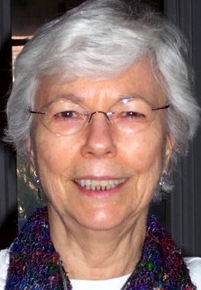 Nancy Moore Ruskin died January 29, 2020. She was born December 23, 1934 in Utica, New York to John and Margaret Moore, and spent the early part of her childhood in nearby Clinton. The family moved to Swarthmore, Pennsylvania in 1943, where her father taught at Swarthmore College. She attended Antioch College in Yellow Springs, Ohio, where she met her first husband, William Lasersohn. They married in 1955 and moved to Cleveland, Ohio, where she taught elementary school and he attended medical school. They later moved to the Zuni Indian Reservation in New Mexico, where he worked for the Public Health Service; they returned to the Cleveland area in 1963. Settling in Shaker Heights, she concentrated on raising their three children, Peter, Mark and Robin, while he went into medical practice. Nancy and Will divorced in 1977, and she became a single mom. In the mid-1970s she returned to school, earning a master’s degree from the School of Applied Social Sciences at Case Western University. She then began a career as a social worker in child psychiatry at University Hospitals in Cleveland. Trained in a Freudian framework, she eventually became deeply discontented with the field as it increasingly replaced talk-based therapy with medication. In 1991, she married her second husband, Arnold Ruskin, and moved to La Cañada, California to live with him. During that period, Nancy and Arnie traveled extensively, visiting Russia, China, Costa Rica, and many European countries. Their years together were happy.

After Arnie died in 2006, Nancy returned to the Philadelphia area to live in the Kendal at Longwood retirement community in Kennett Square, where she remained for the rest of her life. A member of the Society of Friends since childhood, Nancy was rarely active in Friends meetings, but had a strong sense of Quaker identity, and stood in firm support of Quaker values of peace, equality and justice. She enjoyed film, literature, and music, and took several courses in music and art history. She also enjoyed eating out and trying different cuisines — but due to an allergy, was always adamant about avoiding garlic and onions.