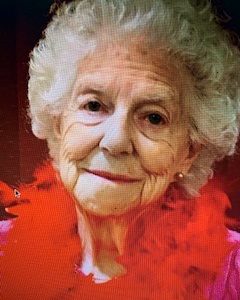 Edith Pusey Cannon, wife of the late Raymond J. Cannon, of Crosslands Retirement Community in Kennett Square, PA, died February 16, 2020 at the age of 90. Formerly of Glen Mills and Media, PA and born and raised in Springfield, PA, Edith (“Edie”) attended George School and Denison University before pursuing a career in teaching and special education. She was an administrator at Elwyn Institute in Media before retiring.

Edith eagerly followed her large family’s lives on Facebook and by phone, and looked forward to her their frequent visits to check up on her, as well as Holiday dinners and Sunday brunches at Crosslands with them. She also was grateful for the constant and loving company of her brother and his wife, who many years ago relocated to Crosslands from Houston, TX. She enjoyed sewing and needlework, and especially loved to travel. Edith served on many committees at Crosslands and loved attending social events there. She often spoke of the importance of her friends at Crosslands, especially in the last years of her life.

Edith was born a Quaker of Swarthmore Friends Meeting, and in later years attended meeting for worship at Crosslands. She deeply valued her Quaker heritage and its approach to life and faith.

Edith’s family wishes to thank Crosslands staff for their compassionate care of our mother while she was a resident. And the following for their guidance and excellent end-of-life care of our beloved mother: the medical team of the 4th floor cardiac unit at Chester Country Hospital, and the nurses and chaplain of Penn Medicine Hospice of Chester County.