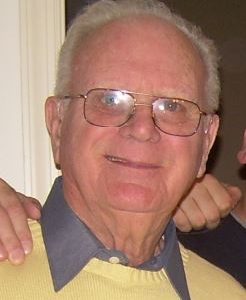 Robert J. Hopkins Sr, age 93, of Avondale, PA, passed away peacefully on Monday, June 22 at Ware Presbyterian Village in his Assisted Living apartment, where he enjoyed living the past 5.5 years. He was the husband of the late Mary Leo Hopkins, with whom he shared 66 years of marriage until her death in 2016.

Born in West Chester, PA, he was raised in Toughkenamon, attended Kennett High School, and lived most of his life in Avondale. He was the eldest of 3 sons of the late William E. Hopkins, Sr. and Ruth H. Hopkins. He was pre-deceased by his wife and his son Robert J. Hopkins, Jr., as well as 2 brothers, William E. Hopkins, Jr. and Kenneth J. Hopkins. He also leaves behind 3 children, Christine Hopkins Rizzotte, Michael L. Hopkins and his wife Donna, and Gary A. Hopkins and his wife Elizabeth.

He was a member of St Gabriel of the Sorrowful Mother Church in Avondale, and also received blessings while attending Mass and Rosary service while he lived at Ware
.
Bob was proud to serve his country during World War II. He enlisted in 1943 with the 3rd Marine Division and spent time in Guam and Okinawa. In 1944 he was on a ship headed for the planned invasion of Japan, which was cancelled following the bombing of Hiroshima and the surrender of Japan. He then served on the island of Chi Chi Jima during what is known as the Chichijima Incident in 1945. He was a prison guard, securing Japanese Officers that the United States was holding due to acts that were later charged as war crimes. He was proud of his service and almost always wore his bright red Marine Chi Chi Jima hat. He was honored to ride in the Kennett Veterans Day parade several times and served as Grand Marshall in 2016.

Bob was always a hard worker. During the early years of his marriage he owned/managed gas stations and then later became rooted in the mushroom business. He enjoyed setting up mushroom selling routes for local growers, then later doing so on his own. He also spent several years as a grower. He built the home that he raised his family in, using mostly his own hands, enlisting local friends with various skills to help, and hiring several local specialists for the technical jobs. He was proud of his home and thrilled to have it pass on to his grandson, Michael Jr., who is happily raising his family there.

He always enjoyed being around and visiting with family and friends, being sure to celebrate holidays at the house, or having parties for neighbors and friends. He spent many days in retirement visiting Michael and Gary at their mushroom plants, always helping out whenever he could. He enjoyed all Philly sports teams, puttering around in the yard, growing his rose bushes along the fence, watching the birds at his bird feeder, playing his word-search game and of course, flying the American flag in the yard. He enjoyed time with the McDonalds Breakfast Club and no matter what or when, always had an interesting story to tell!

Thank you for your support during this difficult time.
Please enhance this tribute to Bob by adding your memories.