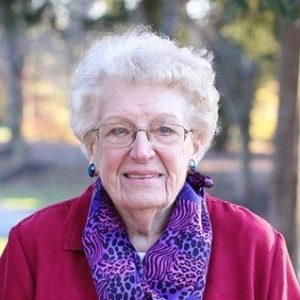 Virginia (Ginny) Detwiler Baldwin passed away on July 27, 2020 at the age of 98 years young, with her daughter, son, and family by her side. She was born to Raymond and Katie Detwiler in Cedars, Skippack Twp., Montgomery County, PA.

Ginny grew up next to her grandparent’s farm. She remembers carrying water to the field for her grandfather and horses while they plowed. On the farm she developed a love for animals, particularly horses where she first rode farm horses bareback, later buying her own horse. During World War II, she was an Air Raid Warden for the town of Cedars where her duty was to drive around the area and make sure everyone’s house was dark during a warning by an air raid siren. She loved the outdoors and sports where she learned to skate with her mother’s ice skates on the frozen grass and later skating on local streams and ponds near Zieglerville, PA.

Ginny attended a 2-room school house from 1st through 8th grade in Skippack, PA and received a well rounded education leading to four years at the J. Horace Landis Joint Consolidated High School in Schwenksville, PA. She excelled in field hockey, basketball and tennis and participated in musicals. She was elected Secretary of her class and continued in this capacity for over 70 years keeping the class together with a newsletter she titled “The Glue.” After high school she enrolled at the Lansdale School of Business and received a Secretarial Degree which her father paid her monthly fee of $20.00 to attend. As a senior she assisted the local Dentist who volunteered giving needy students dental care. Her first job was secretary to the Principal of her high school.
Her second job was secretary and bookkeeper at the National Bank of Schwenksville where she worked for ten years.

Ginny married Richard “Dick” Baldwin of San Angelo, TX in 1951 after having met him on a blind date during World War II in 1942. Dick was employed with the DuPont Co. and they were transferred several times. Their final move was to the DuPont Engineering Department in Newark, DE where Ginny also worked for several years before becoming a homemaker and raising a daughter and son.

In 1962 Ginny and Dick purchased property in “The Wedge” outside of Newark, DE and spent 52 years before they moved to Jenner’s Pond Retirement Community in Jennersville, PA. in 2012.

Ginny was very active in many community and church organizations but she was most proud of the Thanksgiving service at the “Wedgestone” which she organized and hosted for 50 years and accommodated up to 200 people on their property. Her second favorite volunteer position was Secretary for the Brandywine Region AACA antique car club for eight years. Dick and Ginny were also members of this club for 37 years while they toured and showed their 1940 Buick.

A future memorial service will be announced at a later date.

In lieu of flowers, please consider donating to your favorite charity

Thank you for your support during this difficult time.
Please enhance this tribute to Ginny by adding your memories.

In lieu of flowers, please consider donating to your favorite charity

A future memorial service will be announced at a later date