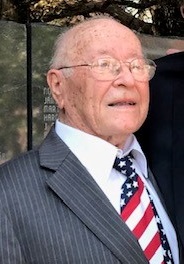 Domenico Ruffini, 92 of West Grove, PA, died peacefully at home surrounded by his family on Saturday, August 8, 2020. He was the husband of Lillian Passante Ruffini. Born October 22, 1927 in Musellaro, Italy he was the son of the late Michael Ruffini and the late Loreta Profeta.

Domenico worked in the coal mines of Belgium and pursued careers in Canada; he met the love of his life Lillian in New York City in 1951 and married in 1953. Domenico initially worked at the General Motors Assembly Plant before becoming interested in starting his own barbershop. He attended barber school in Philadelphia and obtained his license in 1958. He opened Ruffini’s Barber Shop in West Grove in 1964 which is still in operation today and now run by his son, John. He enjoyed gardening, spending time with family, and bringing people together. In 1980, Domenico was elected to the West Grove Borough Council serving the community for over 20 years. In 1998, he was responsible for organizing the funds to build the Avon Grove Veterans Memorial in West Grove. He also was instrumental in organizing the annual Avon Grove Memorial Day Parade which still continues today after 22 years.

Domenico was presented with the Citizen of the year award from the Avon Grove Lion’s Club in 2003 and also honored with a senate citizenship award in 2019 presented by Senator Andrew Dinniman.

In addition to his parents, he was pre-deceased by two brothers, Peter Ruffini and Anthony Ruffini and a sister, Sylvia DiNardo. He is survived by his wife of 66 years, Lillian and their children Michael Ruffini, Donna Hannum (William) and John Ruffini (Diane), his grandchildren, Jonathan and Christopher Ruffini and Bryan and Kathryn Hannum, sisters Iola Tabellione and Mary Lucente and many loving nieces and nephews.

Services and interment will be private.

The Ruffini Family thanks you for your support during this difficult time.
Please share your fond memories of Domenico in the Guestbook below.