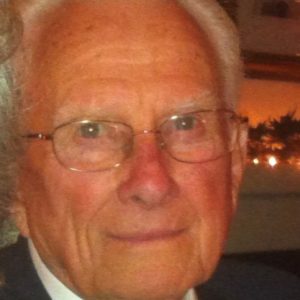 He is survived by his loving and devoted wife of 68 years, Frances Pope O’Sullivan, his sister Isabel Blake, sons Richard and Peter, and grandsons Andrew, Christopher, Connor and Carter.

Born and raised in Narberth, PA, he attended Lower Merion HS and Drexel University before enlisting in the Army at the end of WWII. He was offered an appointment to West Point and graduated with a degree in Engineering in 1952. He married his sweetheart that same year in a military ceremony in Fran’s hometown of Wilmington, DE.

After a distinguished 20-year career as an Army Corps of Engineers Officer, which included service in Korea and two tours in Viet Nam, he settled in Wilmington, working as an engineer in the Public Works department for New Castle County. He was promoted to the position of Chief County Engineer, which he held until his retirement in 1996.

Warren and Fran moved to Jenner’s Pond in 2010. He enjoyed tennis, bridge, ballroom dancing and a busy social life with family and their many friends.

Warren was an avid supporter of the US Military Academy and Retired Military Officers Association.

A private family burial service will be held on Saturday.

Thank you for your support during this difficult time.
Please enhance this tribute to Warren by adding your memories.

Will be held privately on Saturday.