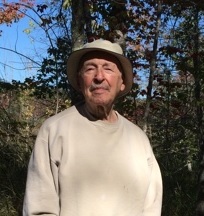 Al Zalon died Wednesday September 2nd after a long, happy and productive life. He was born in Paterson NJ, the youngest of four surviving children of Natan Zalon and Anna Spektor. Natan died when Al was just 3. His mother supported the family after Natan’s death as a seamstress, later becoming a founding member of the ILGWU. She was a staunch non-believer who never forgot her Jewish heritage (or her Yiddish). She loved opera and spent almost every Sunday in the SRO seats at the Metropolitan Opera, passing her love of music on to her children. Al was raised in Paterson and the Bronx, eventually being admitted to Music and Art High School. (He was forced to leave after a year because he couldn’t make up his mind whether to major in Music or Art.)
Fortunately, his subsequent art teacher at Evander Childs HS in the Bronx recognized his talent and encouraged him to focus on painting.

Al did a short stint in the Army, training as a bombardier and eventually ending up in Hawaii just as the war ended. Still serious about becoming an artist, he applied to The Cooper Union to study Graphic Design and Painting. As his classmate, the photographer Carl Fischer, wrote: “When I resumed studies at Cooper Union after the war, returning veterans were several years older than our women classmates and one thing led to another. Theclass of 1948 produced a profusion of weddings— Cooper Couples, we were called.”

Al Zalon and Mary Rankin were one of those Cooper Couples, beginning a life-long love affair. Many of the relationships they formed at Cooper, both social and professional, were critical to Al’s later career. He worked with and knew Carl Fischer, Milton Glaser and Herb Lubalin, among many others. After graduating, Al and Mary lived in the Bronx for a short while before moving to Laramie, Wyoming where Al earned master’s degrees in both Art History and Music History from the University of Wyoming. Which is how I came to be born in Laramie of all places……

Al and Mary moved to Louisville KY in 1951 where Al found a teaching job in the Art department of the University of Louisville and Mary sometimes worked as a runway model. Both continued painting, and in 1952 two of Al’s works (Mary, Linocut and Bus Riders, Watercolor) were selected by the Metropolitan Museum of Art in a national competitive exhibition: American Watercolors, Drawings and Prints. Bus Riders was the genesis of Al’s Kendal series Waiting for the Light. While in Kentucky, Al also subbed on flute with the Louisville Symphony from time to time.

In 1954 Al sought and found a job as a graphic designer in New York, and the family moved back East. His first job was at Columbia records, where he designed the iconic album cover for Glenn Gould’s first recording of Bach’s Goldberg Variations among many others. He later worked as a freelance book designer, creating several book covers that are still recognized. Ultimately he moved to pharmaceutical advertising, becoming VP /Creative Director of the firm Kallir, Philips, Ross Inc. where he spent the last 20 years of his career. During this time Al won several graphic design awards, including the prestigious ONE award granted by the Art Director Club of New York. At KPR he also renewed his commitment to music, playing chamber music at lunch once a month with John Kallir and several other colleagues.

Al retired from KPR in 1990 after it was acquired by Omnicom. He then went on to manage an art gallery in SoHo, Lustrare, dedicated to illustration. The gallery was a successful resource for collectors who were primarily interested in drawings and illustration for about 3 years, until the death of one of its founding investors. Al very much enjoyed working with all the illustrators, many of whom he had known as an art director. He also loved walking down to Soho from Grand Central Station most days.

Al and Mary decided to join their friends Burt and Lanny Lasky in the great adventure of moving to Kendal. In November 2009, they moved to no. 9 Kendal Dr. and to their immense delight, found a wonderful community of loving and interesting friends. For the first time in 55 years, Al returned to painting. He also found people to play chamber music with from time to time. Both enjoyed the chamber music concerts at Kendal and Al reviewed them for several years. Al remained involved with graphic design throughout his life and co-designed several logos with his granddaughter Rachel- one of them via video chat in late July of this year. When Mary died, he was sustained by the support of their friends and made new friends as people joined the community. He also loved going out to dinner (especially for oysters) and socializing of all sorts.

After several falls, he had to give up his beloved 9 Kendal Dr. to move to Westmorland, where he prevailed upon the powers that be to let him make his room as handsome as possible. His ailments didn’t stop him from continuing to paint nearly every day and having regular exhibitions of his new work. The greatest hardship of his time at Kendal was the Covid driven isolation of the final 6 months; being unable to see or spend time with his family and friends was painful. In desperation, Al learned to use technology for the first time in his life during this period. He became somewhat familiar with a device called a “GrandPad” that allowed him to video chat with family. Luckily, staff at Westmorland were able to find him space to make a temporary studio, where he worked every day until the day before the incident that precipitated his death. On that Thursday, Al video chatted from the temporary studio to show us his newly finished piece, with which he struggled mightily. It was a breakthrough painting, and he was tremendously excited to continue down that path.

Al is survived by his daughter Jo, her husband David and his granddaughter Rachel, all of whom will hold him in our hearts forever. “To live in hearts we leave is not to die.”