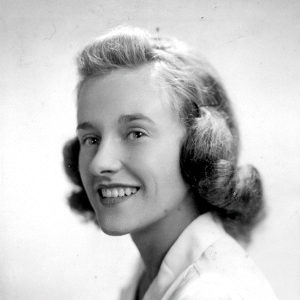 Hazel Craig Gander passed away on October 5 at Jenners Pord Assisted Living in Jennersville Pennsylvania at the age of 99.

Hazel Craig was born in Brockton, Massachusetts on May 24, 1921 to Edgar and Olive Craig of North Easton, where she then grew up.

Hazel was predeceased by her brothers Ed and Bill, and sister Evelyn, and her late husband Fred Gander. She is survived by her three sons and their spouses, Rick and Candy of Newton, MA, Craig and Fran of Denver, Colorado, and Carl and Gail of Raphine, VA, and by nine grandchildren and 10 great grandchildren.

Hazel was an excellent student, and learned the piano well enough to get a job playing at a ballet school as a high school student. She graduated as valedictorian from Oliver Ames High School in 1938. Growing up she and her family spent their summers in Harwichport on Cape Cod and She always loved the seashore. After high school Hazel entered Wellesley College where she majored in English Literature and participated on the crew team, the college choir, and the drama society. While at Wellesley she met Fred Gander, a student at MIT. Upon their graduations in 1942, Hazel and Fred, then an Ensign in the US Navy, were married in the Unity Church in North Easton. Soon afterward Fred was assigned to the Naval Air Station in San Diego, California, and Hazel moved across the country. She worked at the Navy Base until the birth of her first son, Frederick, Jr. (Rick) in 1943. When Fred Sr. was sent to Hawaii, Hazel and Rick returned to North Easton for the duration of Fred’s naval service.

After the war, Fred returned to MIT for graduate school and the family lived in Belmont Massachusetts, near MIT. After earning his Masters degree, Fred took a job with the DuPont Company and the family moved to Kearny, New Jersey, where their second son, Craig was born in 1948. When Fred was transferred to Wilmington, Delaware the family moved to the Wilmington area where their third son, Carl, was born in 1951. After three years there the Gander family moved to the Buffalo, New York area, then in 1962 back to Kennett Square where they lived for many years until Fred retired from DuPont. While living in the Kennett area Hazel was active in tutoring adults in English (ESL). She also worked as a tour guide at Longwood Gardens, utilizing her long-time interest in and knowledge of horticulture.

Hazel was a wonderful loving and devoted wife, mother and grandmother and all her surviving family miss her deeply.

Her Service and Burial will be held privately.

Thank you for your support during this difficult time.
Please enhance this tribute to Hazel by adding your memories.

Her service and burial will be private.