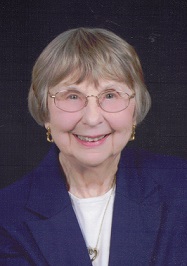 Estelle was born in Taneytown, MD in 1932 to parents Wilbert Naill Hess and Marie Hilterbrick Hess, the youngest of four daughters. After graduating from Taneytown High School in 1949, Estelle left the family farm to undergo training as a registered nurse at Union Memorial Hospital in Baltimore, MD. She was a proud member of the class of 1952.

In 1953, Estelle wed her home-town beau, George Daniel Null, at Trinity Evangelical Lutheran Church in Taneytown, MD. Following their wedding they moved to Newark, DE where George completed his PhD at the University of Delaware and Estelle joined the University’s Student Health Service as a registered nurse. Estelle loved her job at the Health Service, where she established life-long friendships and worked for several years before starting her family.

Inspired by their rural upbringing, Estelle and George purchased a small farm in Landenberg, PA in 1963 where they resided for the next 42 years and raised their four children. When her offspring were in high school, Estelle went back to work as an RN at the University Health Service until she retired in 1997. Estelle was beloved by her colleagues who appreciated her combination of professionalism tempered by self-deprecating humor and wit. Her retirement celebration was a memorable event for her family and colleagues.

Estelle was a longstanding member of St. Paul’s Lutheran Church in Newark, DE. The clergy and congregation of St. Paul’s were a welcome source of friendship and spiritual support.

Estelle and George suffered the tragic death of their daughter, Kathleen, in 1980. Aided in their mourning and sorrow by the international bereavement support group, The Compassionate Friends, they were inspired to start their own local Southern Chester County chapter in 1992. Their dedication to this cause led to lasting friendships and to travel across the United States as they attended many annual national conventions of the Compassionate Friends organization.

In 2007, Estelle and George left their farm and moved to Ware Presbyterian Village in Oxford, PA. Their villa served as a gathering place for many memorable family celebrations attended by their extended family which includes four grandchildren—Justin, Nicole, Andrew, and Gemma—as well as 6 great-grandchildren. Estelle was fortunate to meet many wonderful friends at Ware, and she developed a fondness for the town of Oxford. As Estelle was an avid reader, she especially appreciated the Oxford Public Library.

Estelle is predeceased by her husband, George, following 62 years of marriage; her daughter Kathleen; her parents; and her sisters Maxine Dixon and Ruth Head. She is survived by her sons Michael and wife Tammy of Greenwood, DE, Daniel and wife Karen of Berkeley, CA, and Samuel and wife Mary Ann of Oxford, PA; her sister Louise Grier of Forest Hill, MD; and many loving grandchildren, great-grandchildren, nieces, and nephews.

A private funeral ceremony will be held for her immediate family. A celebration of her life and interment of her ashes will be held, at an appropriate time, at the cemetery adjoining Trinity Evangelical Lutheran Church in Taneytown, MD where Estelle will join George and Kathleen. Please contact a family member if you wish to be notified of this event. Service details will be updated when available at www.kuzoandfoulkfh.com.

TBD Service details will be updated on our website accordingly

TBD Service details will be updated on our website accordingly