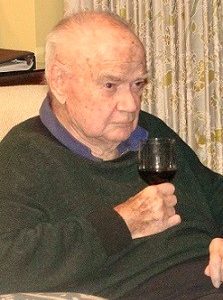 On Thursday, November 5th, Howard Gordon Tennent passed away peacefully at his home in Kennett Square, Pennsylvania at the age of 104 years, eight months.

Howard was born on February 29th, 1916 to Henry Kirkpatrick “Kirk” Tennent and Mabel Taylor Clarke. A leap day baby, Howard would be the first to remind you that he only celebrated 26 real birthdays throughout his rich, long life. He was born in Quebec City, Canada, and the family (including Howard’s brother, Clark Peck “Buddy” Tennent), moved to Leroy, New York when Howard was eight. The family also lived for a short time in Terra Haute, Indiana. Howard received his Bachelor’s and Master’s degrees from Rensselaer Polytechnic Institute and his PhD in chemistry from the University of Wisconsin. Howard and Jean were married on November 26th, 1949. In 1951, they welcomed their first child, Kirk, and purchased their house on Chandler Mill Road in Kennett Square, where Howard lived with Jean until his passing.

Howard was a gifted storyteller and through his final days had an uncanny memory of his experiences spanning more than 10 decades, from his early childhood in Quebec and New York to his college days in the 1930s and 40s to his adult life raising his children in the second half of the century. As a teenager, his father introduced him to Amelia Earhart in an airplane hangar, and as a young man, he watched Babe Ruth and Stan Musial play baseball. In Leroy, he listened to then-Governor Franklin Delano Roosevelt give a speech at his hometown’s baseball field (and later lamented that FDR’s vehicles had roughed up the infield, causing bad hops at Howard’s second base position).

Howard enjoyed a long and storied career as a research chemist at Hercules, Inc., where he was the Senior Research Associate at the Hercules Research Center, and at Hyperion Catalysis International, Inc., with whom he continued to consult until his death. Howard was a pioneer in the field of nanotechnology and holds multiple patents. In the early 1980’s, he was the first to catalytically grow carbon nanotubes, which resist static build up and conduct electricity, making them useful in applications from electronics to automobile parts. Earlier in his career, Howard invented a new way to synthesize carboxymethylcellulose, making it practical for use as a binding agent with food and pharmaceutical applications. He also directed a team that invented a method to mass produce polypropylene, a widely used, recyclable plastic. Howard was revered and respected by his colleagues for his unique combination of analytical skills, innovative thinking, persistence, and professionalism.

For decades, Howard and Jean were very involved in the Kennett Square Quaker Meeting. Howard was a longtime advocate for social justice issues and a proponent of Quaker tenets such as tolerance and non-violent conflict resolution. The couple was active during the civil rights movement in the 1960’s, when Howard was also a member of the Kennett Consolidated School Board. Howard and Jean helped arrange for Dr. Martin Luther King, Jr., to speak at Unionville High School on May 2nd, 1967. During that particularly contentious moment in time, Dr. King’s speech that night was celebrated for helping the town’s diverse citizens begin to come together and address their differences. In the 1960s, Howard was also very involved with the Red Clay Valley Association (now known as the Brandywine Red Clay Alliance), which is dedicated to preserving the history, open lands, and water quality of the Red Clay Creek. Concerned about threats to the watershed via wastewater inputs and soil erosion, Howard volunteered with the association to support its efforts to conserve this local, natural treasure.

One of Howard’s last important actions occurred earlier this fall, when he proudly submitted his mail-in ballot for the general election. Before submitting, he reviewed his signature as it appeared in the voter registration record and then practiced—using his hand recently damaged by melanoma—to ensure his ballot signature matched the official record. Howard passed shortly after Election Day, hopeful that our country’s leadership would reflect decency, morality, and character, consistent with the way Howard led his life.

A bit of a renaissance man, Howard pursued a variety of hobbies and interests throughout his life. Beyond his expertise in chemistry, he had a deep knowledge of natural history, geology (particularly of Southeastern Pennsylvania’s watersheds and Western New York’s glacial history), physics, and meteorology. He obtained his pilot’s license and flew small planes across the Northeast; he built an elaborate model railroad setup in his basement. Howard, Jean, and family spent nearly every summer at their small cottage on Canandaigua Lake, in the Finger Lakes. Howard enjoyed boating, sailing, and swimming in the lake, though perhaps found his greatest joy in watching the sun set each evening over the lake’s far banks. Howard was also a president of the Hercules Country Club, and an avid golfer.

As he aged into his 90s and 100s, Howard enjoyed a quiet and peaceful life at home with Jean, spending most of his time in his living room chair, looking out through sunny floor-to-ceiling
windows at nearby birds in trees and on well-stocked feeders, and beyond to the brook winding through their property. He remained a voracious reader of news, non-fiction, and scientific journals into his last years. And he closely followed the ups and (mostly) downs of the Philadelphia professional sports teams, most passionately his beloved Eagles. At age 101, he celebrated his Eagles’ long-awaited Super Bowl victory with his family.

A memorial service will be held on December 5 at 1PM. Those wishing to attend should contact David Tennent at tennent.david@gmail.com for information on joining this virtual event. The family suggests that anyone wishing to celebrate Howard’s life make a donation to the Brandywine Red Clay Alliance.

December 5, 2020 1:00PM Those wishing to attend should contact David Tennent at tennent.david@gmail.com for information on joining this virtual event.