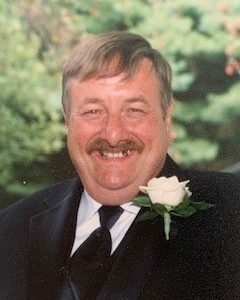 Richard Raymond Toto, “Richie” passed away on January 20, 2021 while surrounded by his loving family. Although he fought hard and continued to work until he was unable, Richie lost his battle with cancer at the age of 67. For all who knew him, Richie was a hard-working and selfless man. His family meant everything to him. They will miss his unconditional love and generosity.
Richie worked at Raymond Toto and Sons, a mushroom farming business that his father started when he came to the United States. He then went on to work at Shriver Construction Company where he operated heavy equipment for many years. Richie loved his work as a mushroom farmer and returned to that career to work at Guizzetti Mushroom Farms. Later on, he opened Rich Toto Top Soil Company, a business where he never took a day off and donated much of the soil.
Richie was a volunteer usher at St. John the Beloved Parish for many years. He was a member of the Pike Creek Bowling League and was a Softball coach at the Kennett Area Park and Recreation Center. Later in life, he developed an interest in playing the accordion. He began to collect accordions, most likely inspired by the fact that he inherited an antique accordion from his father. Richie then became a member of the Wilmington Accordion Club. Richie loved the beach and playing cards. Most of all, he loved being a devoted husband, father and grandfather.
Richie was born in Wilmington, Delaware to Helen Fieni and Raymond Toto. He was married for 48 years to Marcella Marshall Toto who predeceased him in 2019. His daughter Theresa Toto predeceased him in 2020. Richie is survived by two loving daughters; Rachael Quinn (Edward Quinn) of Lafayette Hill, PA and Rebecca Avello (Enrico Avello, Jr.) of Kennett Square, PA; two brothers, Raymond Toto, Jr. and Steven Toto and two sisters, Mary Jarrell and Lena Anderson. Also surviving are Richie’s grandchildren who were most dear to him; Casey Avello, Joseph Nicotra, Gabriella Loughery, Gillianna Loughery and Gocelyn Quinn.
Family and friends are invited to Mass of the Christian Burial at St. Gabriel of the Sorrowful Mother Church, 8910 Gap Newport Pike (Route 41), Avondale, PA, on Wednesday January 27th at 11AM. A viewing will be held at the church from 10-11AM. Interment service follows at St. Patrick Cemetery, Kennett Square.
Although visitation is open to all, there will not be a receiving line. We ask that you please respect social distancing at all times.
In lieu of flowers, memorial contributions may be made to Penn Hospice 150 Monument Road, Ste. 300, Bala Cynwyd, PA 19004 or Multiple Myeloma Foundation www.give.myeloma.org/site