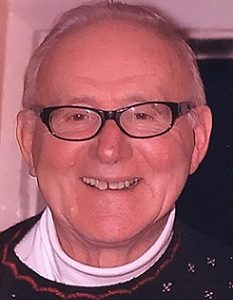 John A. Arrell, or “Jack” as he was affectionately known, age 87, of New London, PA passed away peacefully at home on Saturday, February 20, 2021 surrounded by loved ones. He was predeceased by his wife, Sara Ann Montgomery Arrell with whom he shared 57 years of marriage. Born 1933 in Upper Darby, Pennsylvania, Jack was the son of the late Samuel H. Arrell and the late Frances E. Taylor Arrell.

Jack was a 1951 graduate of Haverford High School. After graduation from high school, Jack proudly served his country as an active duty member of the United States Army from May 1953-1955. Jack worked and retired from Bell Atlantic Telephone Company on a Friday in 1991 after 36 years of service, starting as a lineman and working several positions, lastly retiring as Manager of all Vehicles and Buildings in the Eastern Region. Jack immediately started his second career the following Monday with the mushroom association working for the Needham Companies with his son Steven. Jack quickly became a permanent employee stepping in and addressing issues with DEP, neighbors and the Township allowing the owners to focus on the day-to-day operations of the business. Jack officially became General Manager of the Needham Companies in 2002.

Jack has been involved with numerous organizations, served many years in leadership positions, and passionately served his local community in many capacities. He was elected and served two terms on the Avon Grove School Board, occupying the role of President for his last 5 years. Jack then served 18 years on the New London Township Board of Supervisors as Vice Chairman and Chairman. Additionally, Jack served 15 years as the New London Township RoadMaster.

Throughout his career, Jack has received numerous awards and citations. In 1998, Jack received an award for his participation in the Dirt and Gravel Road Task Force for the Conservation District. Jack was a proud member of the New London Masonic Lodge for 66 years and attended the Christian Life Center in New London, PA.

Jack’s greatest achievements were his family. He found great joy in spending time with his bride including taking her shopping, going out to eat, and throwing holiday parties at the farm. Jack’s pride and joy were his grandchildren and great grandchildren. His fondest memories were taking his children and grandchildren to Disney World multiple times and on various other vacations with the last trip being Honolulu, Hawaii. Jack enjoyed raising beef cattle and sheep as well as crops on his family farm. Jack enjoyed the outdoors and loved to go hunting and fishing. He always looked forward to the annual rockfish fishing trip and crabbing with his sons, son in law, grandsons, and nephews.

Jack was predeceased by one son, Steven Arrell; and two brothers, Samuel Arrell and Robert Arrell.

You are invited to visit the family for a graveside funeral service at 1:30PM on Friday, February 26, 2021 at New London Presbyterian Cemetery, 1986 Newark Rd, Lincoln University, PA 19352. Due to COVID-19 restrictions, the viewing is private.

In lieu of flowers, the family kindly asks contributions be made to Chester County Hospital Foundation, Abramson Cancer Center, 701 East Marshall Street, West Chester, PA 19380 or online at www.cchosp.com/onlinegiving.asp or to the Pennsylvania Conservation District online at www.pacd.org.

To view his online tribute, or share a memory with the family, please visit www.kuzoandfoulkfh.com.