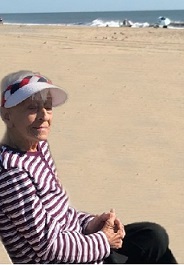 Anna Marie Raivel was born in 1916 in Punxsutawney, Pennsylvania, home of the famous spring-predicting groundhog. She was the tenth of twelve children born to Hungarian immigrants Julia Tote Soltas and Ballas Soltas, known to his children as “the Prince” for his kind and gentle treatment of them. Julia’s parents lived nearby, and the families shared the fruits of their gardens and livestock. Most of the men worked in the local coal mines. When Anna was a teenager the family relocated to Baltimore, where Ballas worked in maintenance at the American Brewery.

Their home on Echodale Avenue became the family gathering place as the children grew, married, and brought new children to increasingly large holiday dinners, parties, and poker games. Anna continued to play poker with her sisters throughout their lives, while working as a clerk for Martin Marietta, a server for Martin’s Caterers and Bluefeld Catering, and finally in the cafeteria of Lever Brothers. In 1934 she married Joseph Foster, who would become a pipefitter for Bethlehem Steel. The couple had two children, one of whom, Betty, survived to start her own family. Anna insisted on caring for Joseph herself when he fell ill with severe emphysema, and boasted that her cooking and care kept him alive and happy far longer than he would otherwise have lived. He died in 1970. Anna was later introduced to and went dancing regularly with widower Harry Raivel Sr., whom she married in 1978. They kept dancing until his death of a heart attack in 1982. Anna retained fond memories of both husbands as she continued to help raise her two beloved grandsons and play poker. The last survivor of her generation, she has now gone to join the others for their celestial poker game. She was 104 years old, and said often that the secret to her long life was to keep moving.

Anna is survived by a loving and very large family, most immediately her daughter, Betty, widow of Francis Rehill; her grandsons, David and Brian Rehill; their wives, Willie and Annie Rehill; and Willie’s son Chris Smith. Her life will be celebrated in June at the Most Holy Redeemer Cemetery in Baltimore, where she will be buried next to Joseph Foster. Donations may be made to Willow Tree Hospice, mailing address, Amedisys Foundation, 3854 American Way, Suite A, ATTN.: Willow Tree Hospice KSQ, Baton Rouge, LA 70816.