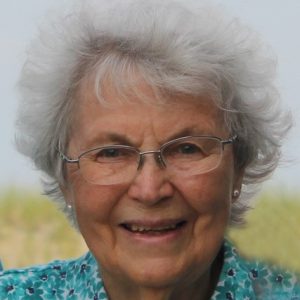 Barbara Gawthrop Hallowell, 97, died January 29, 2022, at Kendal at Longwood, Kennett Square, PA. Born in Kennett Square in 1924, she was the daughter of the late Harold James Gawthrop and Ruth Craighead Gawthrop of Kennett Square, and the wife of the late A. Thomas Hallowell of Sandy Spring, MD, for 57 years.
Barbara attended the old elementary school on Mulberry Street and was among the students who walked from it to the new Kennett Consolidated School in 1932. She continued there through ninth grade, then graduated from George School and Swarthmore College. She majored in biology, then taught science at the Shipley School and biology at Germantown Friends School before studying Physical Therapy at the University of Pennsylvania.
Barbara married Tom Hallowell in 1952 and lived in Little Silver, NJ, where they raised three children. The Hallowell home was a busy hub for the neighborhood kids. Barbara bubbled with curiosity and a sense of wonder that inspired many kid-friendly adventures and science projects, such as a study of pollution in local streams that led to the town installing a municipal wastewater system to improve water quality. She loved animals – the house and yard were usually alive with a wide diversity of creatures, domestic and wild.
In 1971 the family moved to Hendersonville, NC, for Tom’s work. Barbara and Tom restored an old log cabin and spent much time gardening, botanizing, and exploring the mountains, completing the Beyond 6000 challenge to climb 40 of the 60 peaks over 6000 feet in the Southern Appalachians. Barbara loved classical music and played violin, including 14 years with the Symphony of Hendersonville. In 1994, they moved to Kendal at Longwood, where Barbara was active on the Land Conservancy, Photography, and Women’s Ink (writing) committees.
Barbara was a force of and for nature. She had boundless energy and a deep commitment to teaching about the beauties and vulnerabilities of the natural world. She was instrumental in Little Silver’s first Earth Day celebration in 1970 and in the establishment of the Little Silver Conservation Commission; developed nature trails and guided school and community groups; taught continuing education for National Wildlife Federation summits and Blue Ridge Community College in NC; and, along with Tom, wrote a weekly “Nature Notes” column for the Hendersonville Times-News. Barbara also wrote Cabin: A Mountain Adventure; Mountain Year: A Southern Appalachian Nature Notebook; and Fern Finder: A Guide to Native Ferns of Central and Northeastern United States and Eastern Canada, which she co-authored with her daughter, Anne. A skilled photographer, she used her photos for over fifty years in lectures on nature and adventure travel subjects, much travel having been in the Canadian Arctic.
Surviving are her son, John F. Hallowell (Margaret), Anne H. Reich (Peter), and Charles G. Hallowell (Megan McShea); eleven grandchildren: Mary, Emma, Ben, Henry, Alex, Julia, Tommy, Kristi, Ani, Amy, and Danny, all of whom loved taking photos, exploring the outdoors, and playing games with Grandma; and two recently born great-grandchildren, Marit and Jack, who brought her great joy in her 97th year.
A small family celebration will be held at Sandy Spring Friends Meeting at a future date.
Contributions can be sent to the American Friends Service Committee, 1501 Cherry St., Philadelphia, PA 19102, or The Nature Conservancy, 4245 N. Fairfax Dr., Suite 100, Arlington, VA, 22203.