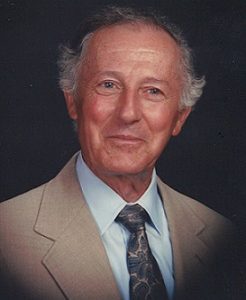 Frank J. Troilo, age 98 of West Chester, PA, entered into the Lord’s presence on Sunday, May 22, 2022 at Paoli Hospital. Frank was the husband of his late wife, Hazel Marie Weller Troilo. Prior to Hazel’s passing in 2018, the two enjoyed 71 years of marriage.

Born 1923 in Collingswood, NJ, Frank was the son of the late Joseph and Eleanor Gerardi Troilo of Kennett Square, PA. In 1929, his family purchased a small mushroom farm on Chambers Road in Toughkenamon, PA, which they worked until 1950.

Frank graduated in 1942 from Kennett Consolidated High School. He was drafted into the U. S. Army and honorably served his country during WWII as a Private First Class of the 3940th Gas Supply Company with the European Theater of Operations in Ireland, France and Germany and then as a clerk typist in Berlin until November 1945.

Frank married his high school sweetheart, Hazel Weller, in June of 1946. The two moved to Wilmington, DE, where Frank pursued business courses at Goldey-Beacom College. He worked in sales at B.F. Shaw Co. in Wilmington for 10 years. Frank had an entrepreneurial spirit and pursued work in alloy steel. He began his career as a sales executive before becoming VP and later, president of Capital Pipe and Steel Products of Bala Cynwyd, PA until his retirement in 1982.

Frank’s passion and mission was to serve His Lord Jesus in ministry and evangelism. His gentle and loving spirit along with his wisdom and willingness to spend time with others brought him many service opportunities throughout the years. He served at the Immanuel Baptist Church in Wilmington for over 30 years as a High School Sunday school teacher and Deacon, chairing that Board. He then served at both Bethlehem Methodist Church in Thornton and Proclamation Presbyterian in Bryn Mawr, PA.

Frank’s love for the ministry of the Gospel of Jesus led him to board positions with the radio ministry of the Far East Broadcasting Company of La Mirada, CA and travels to China, Japan, Saipan, Philippines and Hong Kong. He served tirelessly there and on the board of the Christian Children’s Association in Tom’s River, NJ.

In addition to his beloved wife, Hazel, Frank was preceded in death by his son, Stephen Troilo; siblings, Gerard ‘Bib’ Troilo, Nancy Schiavone and Eleanor Peacock; as well as 2 grandsons, Matthew Proto and James Troilo.

You are invited to visit with Frank’s family on Friday, May 27, 2022 from 10:00AM to 11:00AM at First Baptist Church of Kennett Square, 415 W. State Street, Kennett Square, PA 19348. Services will begin at 11:00AM. Following services, interment with military honors will be held at Union Hill Cemetery.