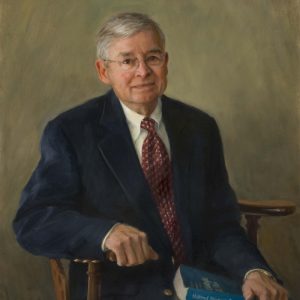 James Byron Snow, Jr. died at peace May 28, 2022, in West Grove, PA. He was the son of Charlotte Louise Andersen and James Byron Snow and was born in Oklahoma City March 12, 1932. During World War II, the family lived in San Antonio, TX while his father, a prominent pediatrician, was stationed at the Brooke General Hospital on Fort Sam Houston. Jim graduated from Central High School, Oklahoma City as valedictorian. He was educated at the University of Oklahoma, earning a B.S. with distinction in 1953. He married Sallie Lee Ricker on July 16, 1954, in Tulsa, OK, and they had two sons and one daughter. He received his M.D. cum laude from Harvard Medical School in 1956. Dr. Snow served his surgical internship at Johns Hopkins Hospital in Baltimore, MD and took his residency in otolaryngology at the Massachusetts Eye and Ear Infirmary in Boston, MA. During 1960-61 he served as a Captain in the Army Medical Corps at the 121st Evacuation Hospital in Korea where he was the only otolaryngologist in the Eighth US Army.

After his military service, Dr. Snow joined the faculty of the University of Oklahoma Medical Center in Oklahoma City where he received the Regents’ Award for Superior Teaching. He rose to Professor and Head of the Department of Otorhinolaryngology. In 1972 he assumed the same position at the University of Pennsylvania School of Medicine in Philadelphia. Dr. Snow published more than 150 articles in professional and scientific journals describing his work on the pathophysiology of the inner ear, the olfactory system and the treatment of head and neck cancer with combined surgery and radiation therapy. He wrote books entitled Introduction to Otorhinolaryngology, and Controversy in Otolaryngology, co-authored Smell and Taste in Health and Disease, and edited Ballenger’s Otorhinolaryngology Head and Neck Surgery through several editions (including the 100th anniversary edition), and Manual of Ballenger’s Otorhinolaryngology Head and Neck Surgery, and Tinnitus: Theory and Management. Dr. Snow was responsible for the training of over 80 specialists in his field. During his academic career, he was active in organized medicine serving as a Director of the American Board of Otolaryngology, on the Council on Scientific Affairs of the American Medical Association, as Regent of the American College of Surgeons and as President of the American Bronchoesophagological Association and American Laryngological Association.

In 1990 Dr. Snow became the first Director of the National Institute on Deafness and Other Communication Disorders of the National Institutes of Health in Bethesda, MD. As Director, he organized the new Institute and recruited many distinguished scientists in research on hearing, balance, smell, taste, voice, speech, and language. Dr. Snow encouraged the application of molecular biology to the study of disorders of human communication. He served as liaison between NASA and the National Institutes of Health. In 1991, Dr. Snow was inducted into the Society of Scholars of Johns Hopkins University, and in 1993 he received the Distinguished Achievement Award of the Deafness Research Foundation. Dr. Snow received the Senior Executive Service Presidential Meritorious Executive Rank Award for his government service. Following retirement in 1997, he served as President of the international Collegium Otorhinolaryngologicum Amicitiae Sacrum and presided at its annual meeting in Washington, DC in 2000, only the third time the meeting was held in the United States since 1926. Dr. Snow served as Convener/Correspondent of the Tinnitus Research Consortium. Subsequently, the James B. Snow, Jr., M.D. Tinnitus Research Award was established in his honor by the Collegium Otorhinolaryngologicum Amicitiae Sacrum. In 2003, he received the Award of Merit of the American Otological Society. He was active in St. Christopher’s Episcopal Church in Oxford, PA.

The sine qua non of his life, Sallie Lee Ricker Snow, his wife of 53 years, passed on to the next life in 2007. He is survived by his sons, James B. Snow III and his wife, Susan D. Sprenger, of Wilmington, NC, and John Andrew Snow and his wife, Meryl Bilotta Snow, of Wayne, PA; his daughter, Sallie Lee Snow Sharer and her husband, Daniel J. Sharer, of Downingtown, PA; five grandchildren: Gabrielle Lippitt Snow and her husband, Brendan James Ward; Ricker Lippitt Snow and his wife Emily Acuña Snow; Kelly Anne Snow and her husband, Brian Christopher Blacker, and Sallie Lee Elaine Sharer, and James Daniel Sharer; five great-grandchildren: Juna, Willow, Oliver, Luna, and Astrid, and cousins, William “Bill” Louie Andersen and his wife, Loretta C. Andersen, of Norman, OK, formerly of Calumet, OK, and Ray Paul Snow and his wife, Suzanne, of Garland, TX, and their descendants. He will be missed by Anna Jane Mercer, who he described as his “dearest companion” in his dedication of the 18th edition of Ballenger’s Otorhinolaryngology Head and Neck Surgery. We all mourn his passing.

In lieu of flowers, a contribution to Jenner’s Pond Retirement Community Benevolent Fund, 2000 Greenbriar Lane, West Grove PA 19390, may be made.