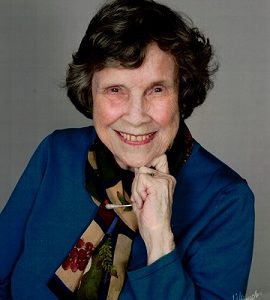 She attended Goucher College in Baltimore and worked for the Draft Board during WWII before she met and married her husband of 68 years, Ross Ballew, then a Lieutenant in the Army. Peggy and Ross relocated the family several times during his long career with GE.

Peggy was a loving wife and mother who studied Archaeology at a local college and volunteered for the Girl Scouts, Church School, Altar Guild, Planned Parenthood and the Garden Club. Until her early 90s, she was an avid “Critters Creator” at Brandywine Museum where she contributed to the annual trove of Christmas keepsakes.

A memorial service will be held at 2:00PM on August 4th at the Crosslands Community in Kennett Square, PA for residents, friends and family. She will be buried at St. Mary’s Episcopal Church on August 5th at 12 Noon in Abingdon, MD, where she and Ross were married. In lieu of flowers please consider donating to the Make a Wish Foundation (www.worldwish.org/donate) or the Hole in the Wall Gang Camp (www.holeinthewallgang.org).

The Hole in the Wall Gang Camp