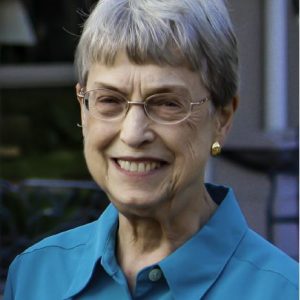 Born in Cleveland, Ohio, she was the daughter of the late Bain-bridge C. and the late Virginia H. Davis.

Dana graduated from Sidwell Friends School, from Earlham College with a BA in Religion, and from the University of Denver with an MA in Library Science.

Shortly after her retirement and moving to Mullica Hill, NJ to the home of her husband George, Dana traveled to China with George to give a talk on the Digital Video Disc (DVD) and its uses in medical library science.

With her husband George, she enjoyed large and small family gatherings, traveling, hiking, Scottish Country Dancing, and attending the Philadelphia Folk Festival and Clearwater Revival (folk festival). She was a member of the Buck Ridge Ski Club, enjoying both cross country and downhill skiing.

She had a lifelong love of colors, shapes, and patterns, ex-pressing itself most in quilting and flower gardening. In her quilting, she looked for inspiration in fall leaves, and had a childhood fascination with clouds, trees, and birds, which she never outgrew.

Books, ideas, and learning new things were important to her throughout her life. Getting out for a walk, in nature and the open sky was very important to her; it recharged her soul. Three important events for Dana were: attending the Grailville in Loveland, Ohio around 1960; living in Kenya, Africa from 1968 to 1970; and living in Santa Fe, New Mexico from 1970 to 1975, where she discovered a love of Southwest culture, art, and nature.

It was the joy and challenge of Dana’s life to be mother, grandmother, and great grandmother.

Dana was predeceased by her first husband, Richard D. Testa, her second husband, (& the love of her life) George L. Houghton, and stepdaughter Katherine H. Bowman.