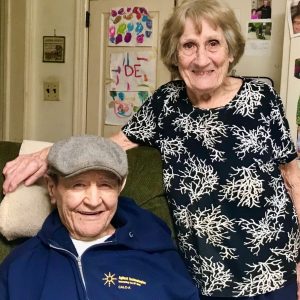 Richard Lewis Manfredi and Anna Gloria Vallorani were wed on June 3, 1950. The photo above shows them on their 69th wedding anniversary on June 3, 2019. Richard was born in Annville, PA to Rocco Manfredi, an immigrant from Montorio al Vomano, Abruzzo, Italy, and Inez Maria Casantini of West Virginia on September 21, 1928. Anna was born in Philadelphia to Romano Vallorani, who immigrated to the US from Ascoli Piceno, Italy, and Filomena Staino, who left Pedace Cosenza, Italy as a child, on October 19, 1928. They met in Toughkenamon, Pennsylvania as teenagers after both their families had relocated to the small town and gotten involved in the business of growing mushrooms. Richard was a mushroom grower most of his life and Anna was homemaker. Together they raised six children on a horse farm in Toughkenamon and were involved for many years in the breeding and racing of Thoroughbreds. Richard had a trainer’s license for many years and loved watching his horses race. They were known to their friends and family as Anny & De.
Richard passed away on Oct. 16, 2019 of congestive heart failure. Anna followed him in death on March 22, 2020 of the same affliction. Both were 91 years old at the time of their deaths. Both were entirely devoted to their children and their animals. While their children eventually moved out, they never went far as all six of their children have homes in Southern Chester County. They are survived by their six children, Vicky Lesniczak (Gene), Michele Carr (Ben), Erica Blittersdorf (Tommy), Rocco Manfredi, Nicole Roberts (Stuart) and Deanna Manfredi (Tarquin Moore), two grandchildren and three great grandchildren. Anna is also survived by her brother, Joseph Vallorani and predeceased by her sister Marie Caputo. Richard is survived by his sister Sandra Manfredi and brother Rocco Manfredi, Jr.
Burial will be private

Thank you for your support during this difficult time.
Please enhance this tribute to Richard and Anna by adding your memories.

Services will be private

Burial will be private