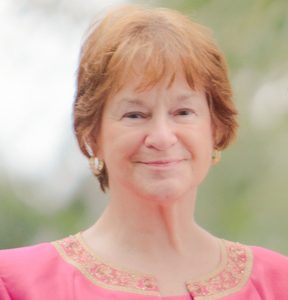 Maria M. Bosworth (Cozanitis), 81, passed away on Thursday, April 30, 2020 at her residence in Cary, NC, after a long battle with dementia.

Maria was born January 20, 1939, in Philadelphia, PA, and raised in Kennett Square outside of Philly. Maria was the youngest of five children. Her family resided in the home above the Kennett Kandy Kitchen, a renowned restaurant owned and operated by Maria’s father, Alexander Cozanitis, from 1923 until his death in 1962. Maria’s mother, Elizabeth Cozanitis, continued to operate the Kandy Kitchen until 1972. Maria graduated from Kennett High School in 1956. She attended Delaware University and Moore Institute of Art to study design.

While studying at Delaware University, Maria met her future husband, Paul Bosworth, an ROTC Engineering student at The University of Pennsylvania. Upon graduation, Paul was commissioned as an Ensign in the U.S. Navy, and the couple were wed on September 2, 1960. Over a 22-year journey with the Navy, Maria and Paul were stationed abroad in Yokosuka, Japan and Keflavik, Iceland, and in locations across the U.S. before settling in the Chicago area. Maria was a loving and devoted wife and mother of four sons. She was a homemaker and accepted the challenges of maintaining the home when Paul was at sea, and of relocating and setting up new homes every two years as the family was reassigned to different military posts. Over the years, Maria attended countless cub scout events, baseball and soccer games, wrestling matches, Navy/company events, and school and church activities with her family. Maria loved playing the piano, was a fabulous cook and was talented with crafts, sewing and cross-stitching designs that were framed and placed on display.

Maria restarted her professional career as her youngest sons reached high school, managing and operating child day-care centers in Libertyville, Illinois. She quickly earned the reputation as a professional, caring and compassionate day care director, and families joined waiting lists to enroll their children in her schools. After seeing their sons graduate high school and attend college, Maria and Paul relocated to warmer weather in Cary, North Carolina to start retirement and be close to grandchildren. The couple divorced several years later. At age 65, Maria started her own company, Cozy Comforts, sewing custom pillows for the home and for outdoor furniture. After 5 years of operations, she had more demand than she could keep up with and chose to turn away work rather than hire and grow her business.

Maria loved her family. She gave selflessly of herself to support them at every stage in their lives. She will be remembered for her unconditional love, devotion to her children, grandchildren, and great grandchildren, for her favorite dinner and dessert recipes, for the strong values she imparted to her family, and for the pride she took in raising four boys.

Surviving Maria are her four sons – Craig and his wife, Jennifer, and their sons Avery and Aiden (Loveland, OH); Scott and his wife, Peggy, and their daughters Kristen, Lauren, and Chelsea, and their four grandchildren (Apex, NC); Tim and his wife, Liz, and their children Alexandra, Henry, Will and Owen (Naperville, IL); and Mike and his wife, Kim (Olive Branch, MS). Maria is also survived by her sister Helen Shaiko (Bala Cynwyd, PA); brother Demetrious (Jimmy) Cozanitis (Athens, Greece); sister-in-law Rosalind Cozanitis, wife of brother Eleas (Lee) Cozanitis (Newtown Square, PA); and many loving nieces and nephews. She is predeceased by her parents, Alexander and Elizabeth Cozanitis, her sister, Despina Zerdes, and her brother, Eleas Cozanitis.

Maria will be laid to rest next to her parents and brother at the Union Hill Cemetery in her hometown of Kennett Square. Due to pandemic restrictions, the burial will be a private service limited to Maria’s children. A memorial service will be planned in the future.

Maria’s family would like to thank the care providers at Woodland Terrace Senior Living and Transitions LifeCare Hospice for their loving and compassionate care.

In lieu of flowers, memorial contributions may be made in the name of Maria Bosworth to: Alzheimer’s Association at alz.org.

Due to pandemic restrictions, a Memorial Service will be planned for a later date