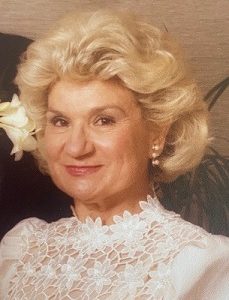 Pauline was born on May 25, 1925 at the Chester County Hospital in West Chester, Pa. She was the daughter of the late Pietro and Lucia (Martelli) Di Guiseppe.

Pauline’s parents immigrated into the United States through Ellis Island, New York. They were from a small town, Civitella del Tronto, located in the province of Abruzzo, Italy, Northeast of Rome.

Pauline’s parents were good examples to her and their Grandchildren. Her Father, Pietro, had an entrepreneurial spirit. He established two businesses, one in mushrooms and the other in real estate. Her Mother, Lucia, had a strong personality and a good work ethic. Both parents had a tremendous amount of integrity.

After Graduating from Kennett High School in 1943, Pauline spent two and a half years living in Los Angeles, California. She became a regular at Tommy Dorsey’s establishment, Casino Gardens and soon became somewhat of a legend for her dancing skills, as she dazzled some of the biggest movie stars of that time period (Frank Sinatra, Lucille Ball, Ava Gardner and many others). Soon Pauline caught the eye of Tommy Dorsey’s band manger, George (Bullets) Durgom, who was responsible for controlling the careers of many famous stars. He was interested in discovering her as a new talent, however, Pauline had other ideas. She danced for fun and was not interested in a Hollywood career. Eventually, Pauline decided to head back to Kennett Square, Pa.

Pauline was a prominent business owner of Clifford’s Hair Fashion for fifty six years. She enjoyed a loyal clientele. She knew everyone in Kennett and everyone in town knew her as (Dolly). She was diminutive in stature with a big personality and infectious laugh, she was quite the character. She was always accepting and supportive, a life long member of St. Patrick’s Church in Kennett Sq., always willing to help others. She enjoyed having fun and was a phenomenal dancer. Her favorite restaurant was Giordanos’s in Kennett. She loved the food and attention she received from the wait staff. She had a competitive side, enjoyed playing bridge, pinochle, solitaire, along with doing crossword puzzles. She was an avid reader of the Philadelphia Inquirer. Pauline loved her Grandchildren and was always the doting Grandmother. She was a great example of strength, determination and perseverance. She was one of a kind, truly a unique person. Pauline will be sorely missed.

There will be a private burial with the immediate family.