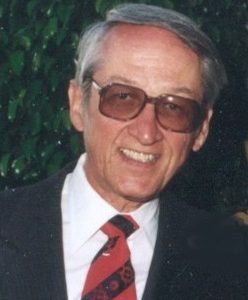 Jacob J. Orbon Sr. passed away quietly while in hospice care in West Chester, PA on Tuesday October 20, 2020. He is the son of Jacob Edward Orbon and Constance (Wobles) Orbon. He was surrounded by family during his last days. He was a resident of Pocopson Home since 2017. Jacob was born in Nanticoke, PA and lived there until he joined the Armed forces in 1947. He served in Alaska as a sergeant in the Army. He married Kathryn in 1954 in Plymouth, PA.

He spent the years of 1957-64 in Hellertown and Bethlehem, PA. Then he moved with his family to Towson, Maryland in 1964 and stayed there until 1976. At that time he moved to Kennett Square, PA and lived out the rest of his life with brief interludes of management positions in steel companies in the US. He then started an executive placement business in Kennett Square, PA.

He is predeceased by his parents and three siblings and the mother of his 5 children, Kathryn Orbon. He is survived by two sisters, Martha Orbon, and Rita Pitrelli of Sydney, Ohio. He is also survived by five children who are Karen Lane of Philadelphia; Jay Orbon of Los Gatos, California; Michael Orbon of Bynum, North Carolina; Jan Orbon of Wilmington, DE; John Orbon of Berkeley, California. There are twelve surviving grandchildren and one great grandson and a partner of 20 years, Guille Opdenaker.

Jacob studied Chemistry at Scranton University and concentrated with special studies in Metallurgy. He earned graduate credits from UMBC and Loyola College in Maryland in both science and business courses. He was a top student and therefore gained access to the Loop Course in Metallurgy at Bethlehem Steel (1956-1964).

He was employed by numerous steel companies including Bethlehem Steel, Lukens Steel, and Lone Star Steel.

Jacob took great pride in the accomplishments of his children. He always expressed that “You can be whatever you want to be” because he knew what it was like to start as the son of a coal miner, chose to be educated and then pursue a new path.