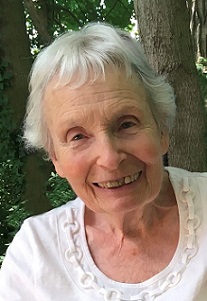 Patricia was born on February 11, 1932 in New York, New York to Israel Magelaner and Helen Resides She received her Bachelor of Science degree in Nursing from the University of Pennsylvania. While studying at college, she met Robert Reeder, and they married in 1954.

Patricia spent many years working as a head nurse at Crozer-Chester Medical Center. Later, she taught Nursing both at Wilmington College and Methodist Hospital in Philadelphia. Patricia also had a passion for volunteering, and often used her nursing skills to assist at Red Cross blood drives. Even after retirement, she spent countless hours visiting local nursing homes, often bringing along her dogs and her grandchildren to encourage and uplift the residents.

Patricia, better known as Pat, loved spending time with her family. After retirement, Pat and Bob moved to the Pocono Mountains of Pennsylvania, where, for over twenty years they hosted friends and family in their log cabin home, fondly named “The Cabin”. Pat’s grandchildren remember the weeks spent each summer baking brownies, swimming in the pond, and taking long walks in the woods.

Pat was good at almost anything she tried. She loved to garden, and her home was surrounded by lush flower beds that she spent many hours cultivating. She had the unique ability to know the name of just about any plant she saw. She enjoyed sewing and made beautiful quilts for everyone in her family. Pat was always up for an adventure, traveling to places like Montana, Costa Rica, and even Japan during her retirement.

Patricia was preceded in death by her parents, her husband Robert Reeder, her daughter Nancy Glenn, and her son-in-law Richard Eby. Patricia is survived by her brother Louis Israel (Beverly) Magelaner, daughters Jeanne Susie, Beth Eby, and son David (Marie) Reeder. She is also survived by eleven grandchildren and eight great-grandchildren.

A private memorial will be held for immediate family at a later date.