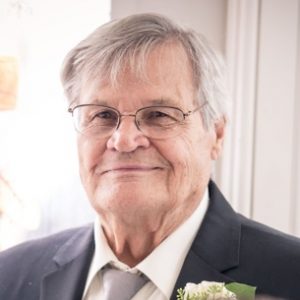 Kenneth “Ken” Evans Holloway Sr., age 92, of West Chester, PA, died Sunday, October 24, 2021 at home with his loving family. He was the husband of Shirley J (La Riviere), with whom he shared 71 wonderful years of marriage.

Born in Chester, PA and raised in Dearborn, MI, Ken was the son of the late Harry Nelson Holloway and the late Annabella (Jones).

Ken was in junior college in Michigan when he began dating Shirley. He soon moved back to PA and began working. He and Shirley were very devoted in their letter correspondence for a year before they married and Shirley joined Ken in PA, where they raised their family.

Ken was a talented swimmer and diver, teaching diving in addition to competing. Ken and Shirley were also avid sailors, treating their family to many wonderful days out on the “Passing Fancy”. Ken also enjoyed studying history and skiing, but nothing as much as spending time with his family.

Ken’s grandchildren and great grandchildren will have many memories of their PopPop/Great Pop attending their sporting events, cheering them on, and always encouraging their talents and interests.

Ken owned his own Specification Consulting company called SpecTech, which he grew into a successful business.

Ken is preceded in death by his parents; brothers Frank and Harry Nelson; and sister Regina.

A private family memorial will be held in the spring.