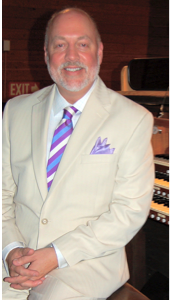 Brian-Paul Thomas’ life quietly slipped away on December 30, just two weeks after his 61st birthday. ‘BP’ was born in 1960 in Yakima, Washington to Harold ‘Tommy’ and Mary Lou Thomas, two bastions of Music Education in Central Washington. He began piano lessons at age 5, landing his first church music job at age 15 at the First Baptist Church in Yakima. While attending Eisenhower High School, BP was the accompanist for The Lancers (swing choir) and a regular participant in musical theater productions at the Warehouse Theater.
Following graduation from high school, BP attended Westminster Choir College in Princeton, N.J. He studied organ and, as a member of the Westminster Choir, performed several times with the New York Philharmonic at Lincoln Center. Upon completing a bachelor’s degree, BP pursued graduate studies at the University of Indiana. He served as assistant organist at Christ Church Cathedral in Indianapolis. His first full-time church job was at Grace Episcopal Church in Nyack, NY, where he remained for seven years. During that time, he also taught Music History at nearby Dominican College. After leaving Grace Church, he became the Organist & Choirmaster at Christ & Holy Trinity Episcopal Church in Westport, CT. In 1998, BP became the Organist & Choirmaster at St. Mark’s Episcopal Church in New Canaan, Conn. He developed four choirs and welcomed all, from Pre-K to octogenarians. Over a period of twenty years, he introduced many special events, including an annual “Messiah” at Christmas and legendary Easter services with horns from the West Point Military Academy and tympani. Other highlights include a solo organ concert at Canterbury Cathedral (England), leading his Parish Choir on three trips to England to perform Evensong in Episcopal cathedrals, and accompanying the St. Mark’s Youth Group on pilgrimages to the monastery in Taize, France. He also received a degree in Divinity from the Union Theological Seminary in New York City.
BP is survived by his sister, Dr. Julie Thomas; brother Scott (Guylaine); uncle Kent Green; nephew Cameron Thomas; nieces, Gabrielle Thomas, Wendy Bax (Dan) and Melissa Jones (Chris); cousins Christy Marcus (Trey), and Nicole Green (Jeff) and Jan Adolphson; great nieces Elyse and Jenna Bax. A memorial service will be held to honor Brian- Paul at St. Mark’s Episcopal Church in New Canaan, CT on May 21, 2022, time pending. Also, a Celebration of Life will be held in Yakima, WA (date TBA).
Regardless of the moniker (BP, Mr. BP, Beep, Ton-Ton Beep, Dr. Bombay), his persona remained constant: gregarious, fun (and food) loving, “larger-than-life!” The P.T. Barnum of Choirmasters who, in flowing liturgical vestments and booming, infectious laugh, inspired generations of musicians to perform at a level beyond their own expectations, transformed by the genuine love of music he exuded. Although taken from us far too soon, his joy in living, his mirth and his wry smile will always be held in the hearts of those whose lives he touched.