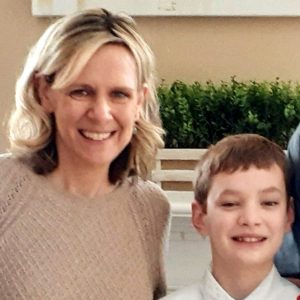 Jennifer was a captivating woman whose authenticity and charisma magnetized anyone she met. Jenn was a people-person with an easygoing manner and a brilliant sense of humor. Jennifer took genuine interest in getting to know others and liked to have fun wherever she went. Whether it was at a winery enjoying a glass of wine or hiking a trail at a local nature preserve, her carefree view of life made her a joy to be around in any setting.

Born in Darby, PA, Jennifer was the daughter of Carol Krupsky Happersett and the late William Happersett. Carol and William raised Jenn in Sharon Hill, where she had a happy childhood. She graduated from Archbishop Prendergast High School in 1989 and continued her higher education at Drexel University, earning her Bachelor’s Degree in Film Production.

Jennifer’s studies landed her a coveted position as video editor at CNN. She worked for CNN for several years, and lived in both Florida and then Atlanta, GA. Upon returning to PA, Jenn worked as a film producer at Comcast in New Castle, DE. Most recently, Jennifer worked as an Executive Administrative Assistant at CPV Manufacturing in Kennett Square.

Though Jenn was a hard worker throughout her life, she settled down when learning she was pregnant with her beautiful baby boy, Ryan J. Prince, so she could focus on becoming a first-time mom.

Jennifer’s son, Ryan, was born on February 2, 2009 in West Chester, PA and grew up in Kennett Square. He attended Greenwood Elementary before moving up to Kennett Middle School, where Ryan was a 7th grade student.

When he was younger, Ryan played soccer and was a member of Cub Scout Pack 60. As Ryan grew up, his interests shifted into playing Xbox and spending time with his cousin, Jonathan. Jonathan and Ryan were only 7 months apart and the two were thick as thieves. Ryan was very much like his Mom in many ways and had a sweet, gentle soul. Though he was always kind and polite, Ryan had a silly side – especially when goofing around with Jonathan and his friends.

Jennifer and Ryan would often meet with Jennifer’s sister and nephew, Connie and Jonathan, to enjoy an outdoor adventure or a walk at Longwood Gardens. Jenn and Ryan loved to visit the shore and spend time on the beach with their family. The two also enjoyed visiting New England, where they ventured for several family vacations.

Jennifer and Ryan are survived by their mother and grandmother, Carol Happersett; their brother and uncle, Michael (Kathy) Happersett; their sister and aunt, Connie (Robert) Hickman; niece and cousin, Jordan Happersett; nephews and cousins, Michael Happersett and Jonathan Hickman; as well as many friends and those whose lives they have touched. Ryan is also survived by his grandmother, Lydia Prince; aunts, Christine Sauer and Kathy Prince-Sauer; and six Sauer cousins.

In lieu of flowers, memorial contributions may be mailed to After-The-Bell, P.O. Box 1068, Kennett Square, PA, 19348 or made online at https://www.afterthebell.org/. (Ryan enjoyed attending several of the after-school programs with his friends and cousin. It provides recreational, social and academic skill activities for Kennett Middle School students).

***The Mass of Christian Burial for Jennifer and Ryan will be live streamed. To view, please click: https://venue.streamspot.com/66c95b9b ***

*To view the event via live stream, please copy and paste the following link into your web browser : https://venue.streamspot.com/66c95b9b

*Please plan to meet at Calvary Cemetery, out of safety concerns there will be no procession