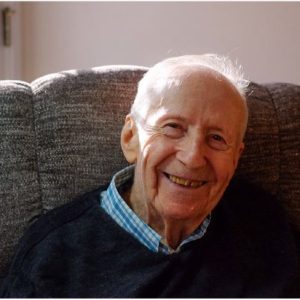 Cort Raynor DeVoe, 95 years old, died peacefully on January 20, 2023. He was married for 72 wonderful years to his beloved wife Nancy, nee Whitney, who survives him.

Cort was born in Brooklyn, N.Y. on November 23, 1927. He attended Brooklyn Technical High School, until he entered the U.S. Coast Guard as an enlisted man in 1945. After attending the Coast Guard Academy prep school in Groton, Connecticut, he entered the Coast Guard Academy in 1946. Cort graduated in 1950 with a BS in Engineering. During June week, he became engaged to Nancy. His initial service station was on a Coast Guard ice breaker home ported in Juneau, Alaska. He returned (on leave) to marry Nancy on the 21st of April 1951. They lived in Alaska where he continued to serve on the Coast Guard Cutter Stories. He transferred to a buoy tender working the Aleutian Islands chain from its home port in Kodiak, Alaska. Nancy was able to join him in Kodiak. Next, they were relocated to San Francisco, where they were stationed until 1953. He then transferred to the Coast Guard Reserve and returned to civilian life in Groton, Connecticut.

After a few short years they built a house in Mystic, Connecticut in 1955. They lived there for 45 years, expanding the house as the family grew. As the boys grew up, Cort served as a coach in Little League, as a Cub Scoutmaster and in various positions in the Boy Scouts. As each of the boys graduated from high school, the family chartered sailboats in the British Virgin Islands.

Nancy and Cort were active in St. Mark’s Episcopal church, teaching Sunday School together and Cort serving on the vestry as Treasurer of the church. He Cort Raynor DeVoe 1927 – 2023 was a member of the Ram Island Yacht Club and served a term on the Representative Town Meeting. He obtained an MS in Electrical Engineering from the University of Connecticut in the early 1960’s specializing in Stochastic Signal Processing. Over the years,

Cort and Nancy traveled extensively, managing to visit all seven continents. Cort went to work for the Electric Boat Division of General Dynamics Corporation in Connecticut in 1956. During this period he formed a new R&D department with a group of engineers and analysts who developed a new Combat Control System for submarines built around a central digital computer and multiple CRT displays. He also formed a group with analysts who worked for the Navy in the area of technology, tactics and new U.S. submarine capabilities required against the cold war Russian submarine threat. He continued this work at the Naval Underwater Systems Laboratory from 1973 to 1992 where he served on several high level study groups, receiving two Department of the Navy Meritorious Civil Service awards for Submarine Platform and Combat Systems Requirements Analysis. He also received an award for conceptual development of a battle group multi-static sonar system. When he retired from the Laboratory he received the coveted Decibel award. After retirement from the civil service he completed his career with Sonalysts in 1997.

In the year 2000 they moved to the Kendal Crosslands Continuing Care Retirement community in Kennett Square, Pennsylvania, living first in the Cartmel community then moving to the Crosslands community in 2009. While at Cartmel, Cort served as Chairman of the Property Committee and on the Landscape Committee.

They attended the Episcopal Church of the Advent in Kennett Square.

A memorial service for the family and friends will be held at Crosslands, in the William Penn Room on Saturday, January 28 at 2pm. Interment will be at a later date in the Elm Grove Cemetery in Mystic, Connecticut.

Donations in his memory may be made to the Episcopal Church of the Advent in Kennett Square, PA or to a charity of the donor’s choice.

Episcopal Church of the Advent